I took a very pleasant urban ramble on Saturday, from Greenwich, east along the river and past the Thames Flood Barrier, under the Woolwich Foot Tunnel and then back west to Wapping (with a DLR trip through some of the boringer bits of pudding mill lane/Bromley-by-Bow). I’d done a (slightly modified) version of this five years ago to the day – and because of its proximity to the Millennium Dome, City Airport and the docklands redevelopments, dubbed it the Millennium Follies. 5 years ago, passing by the Anchor and Hope pub, we found this curious conflagration of streets: 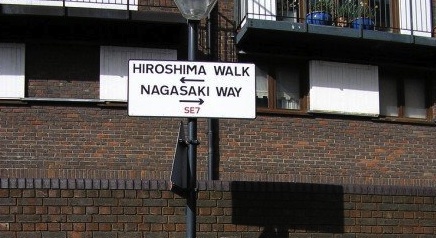 It was pretty surreal – why were these two streets in Woolwich acting as some sort of memorial for the bombing of Hiroshima and Nagasaki? I never found out. In fact, if you know, then please tell me.

I showed another rambler this photo recently, who asked “where is this”? Well, I can show you the location on googlemaps:

Ok, so Google Maps doesn’t show “Nagasaki Way” at all – that’s ok, Google is often a bit crap for footpaths. “Hiroshima Walk” is referred to as “Riverside”. Weird. Let’s take a look at Open Street Map. Hmmm. Same thing. I couldn’t find anything about it on google. This chap had a similar photo, minus mourners, from later in 2007. I resolved to chase this down on this fifth year anniversary. This is what we found: 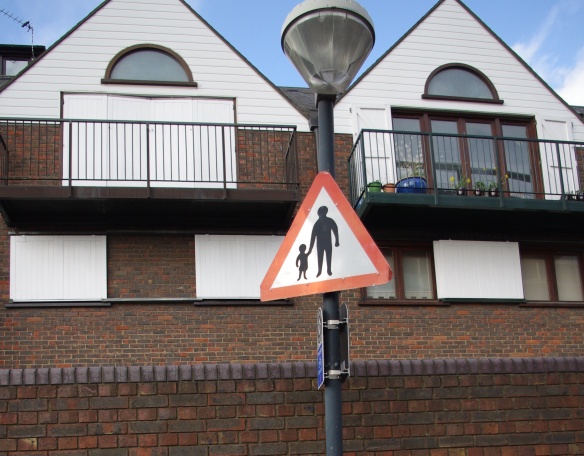 Slightly different angle, same location. Hiroshima Walk and Nagasaki have been redacted. No idea why, any more than why they existed in the first place. Can anyone help solve this mystery?

While you’re sleuthing, here are some nice pics of the ramble…